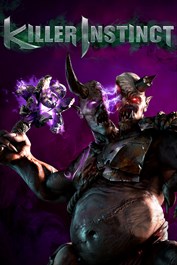 Is your PC Killer Instinct ready? Click ‘More’ to find out! Discover your Killer Instinct! The legendary fighting game franchise comes to Windows 10! The legendary fighting franchise is back with all new visuals, over-the-top action, a wild cast of combatants, rocking reactive music, and C-C-C-COMBO BREAKERS!!! Choose your ultimate combatants each with fluid animations, unique combat tactics, and enthralling special attacks. Use the open-ended combo system to rack up huge combos as your opponent looks for openings to break you and turn the tides of battle. Go online and compete against players from all over the world, or master your combat skills with in-depth tutorials and intelligent AI combatants. Controller recommended FEATURES: • Fight for Free! Play all game modes with a free fighter, including online multiplayer! Fighters are available for individual purchase or get the whole cast in a bundle. • Extensive cast of powerful combatants with tons of customization options including Retro Costumes and Accessories. • 20 Stages with intense stage destruction. • Competitive online matches with state-of-the-art fighting game netcode. • Test your skill online in Monthly Ranked Leagues. • Cinematic Story Mode. • Extensive Dojo tutorial teaches all the core mechanics for Killer Instinct. • Train an AI combatant and challenge your friends to asynchronous matches in Shadow Lab. • Free Updates to the base game - all Fighter balance patches are included for free. XBOX LIVE FEATURES: • Online multiplayer Cross Play with Xbox One. Pay attention to the Performance Grading test automatically performed before your first match. • Play anywhere with Cloud Save between Xbox One and Windows 10. • Killer Instinct includes rich Xbox Live features like Achievements, Game DVR, Leaderboards, and more. • To play this game, you'll need to use your existing account on Xbox Live or the same Microsoft account you used to purchase the game. ADDITIONAL PC SPECIFICATIONS: • Supported peripherals: Windows-compatible keyboard, Xbox One Controller for Windows, Xbox 360 Controller for Windows, and Xbox 360 Fight Sticks.* Controller recommended. • Network: Broadband Internet connection SUPPORTED OS: Windows 10 (64-bit version only) with Windows 10 November update installed (Windows Version 1511). Learn how to check what version of Windows 10 your PC is running and how to update to Windows 10 Version 1511 at http://windows.microsoft.com/en-us/windows-10/windows-update-faq. DEFAULT INSTALL LOCATION: Killer Instinct will install to the default location set by your device. To see where the game will install as default, press the Windows key, type “Storage” and then select ‘Storage.’ Here you can choose which drive apps will save to by default. KNOWN ISSUES: • To enable cross save between Xbox One and Windows 10, you must sign in on the same Microsoft Account associated with your Gamertag on Xbox One. • *Xbox 360 Fight Sticks are supported. Xbox One Fight Stick support will be available in a future release of Windows 10.