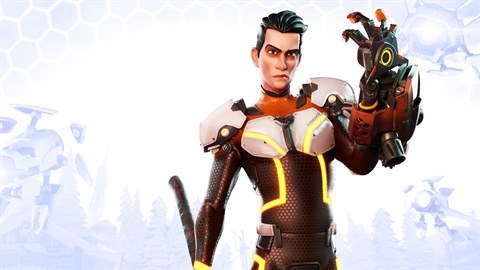 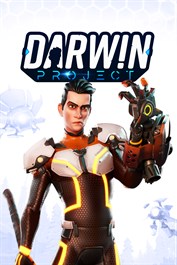 Featuring arcade style third-person combat, the fighting system is at once primal, with the main weapons being an axe and bow, and futuristic with powers such as teleportation and energy shields. The twist is the addition of a Show Director, a player character that runs the show, spicing things up or balancing as need be. BATTLE ROYALE & SURVIVAL Darwin Project is an intense 10 player battle royale which takes place in the snowy Canadian Rocky mountains. Players must first conquer the cold, crafting fires and warm clothing; then find clues, lay traps, and hunt down the other contestants. To be the last inmate standing, players use combat, crafting, tracking, and their personality. ESHOW : THE SHOW DIRECTOR TAKES CONTROL OF THE GAME In each match, one player takes on the role of the Show Director who oversees the arena from above in a camera drone. The Director dashboard includes a suite of tools which allow them to give the underdog an unexpected edge or turn the tables on a particularly bloodthirsty contestant by summoning a gravity storm, restricting zones, or unleashing a Manhunt that reveals a player's position in the arena. Full details on the latest status of the game, how you can give feedback and report issues can be found at www.scavengers.ca