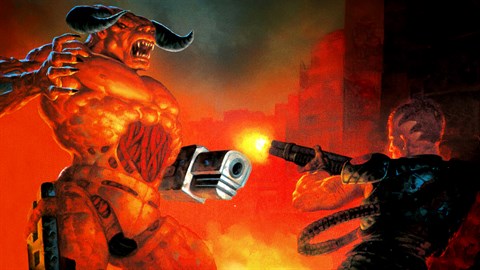 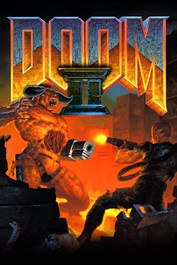 Developed by id Software, and originally released in 1994, DOOM II is a critically acclaimed, action first-person shooter and sequel to DOOM (1993). An enhanced version was released on PC, consoles, and mobile devices in 2019. Now, play the enhanced version of the base game, and the additional content in one place. Story Hell has invaded Earth, and to save it, you must battle mightier demons with even more powerful weapons. This beloved sequel to the groundbreaking DOOM (1993) introduced players to the brutal Super Shotgun, the infamous Icon of Sin boss, and more intense FPS action. Features - Upgraded visuals - Improved mouse and keyboard controls - Gamepad/controller support - Widescreen resolution support - Native 60 FPS support - *Free, community add-on content--over 10 add-ons including Sigil, Rekkr, Syringe, Double Impact, Arrival, Revolution, and many more. - All twenty Master Levels - Local split-screen multiplayer co-op and PvP - *Log in with your Slayers Club account to receive a retro-inspired, Bronze DOOM Marine skin and matching nameplate for DOOM Eternal. *Bethesda.net account required. See end user license agreement, Terms of Service, Privacy Policy and additional details at bethesda.net. TNT: Evilution Expansion The UAC relocated their experiments to one of the moons of Jupiter. A spaceship, mistaken for a supply vessel, was granted access. But when it got close to the base, demons poured out. All your comrades were slaughtered or zombified. This time it's not about survival. It's about revenge. The Plutonia Experiment Expansion Every effort has been made by the nation's top scientists to close the seven interdimensional Gates of Hell, but one portal remains open. Alone, you must infiltrate the ravaged base, defeat the demon Gatekeeper, and seal the last Hell portal before the undead take over the world. Additional Masters Levels Originally released as the “Master Levels for DOOM II,” this expansion includes twenty additional levels, all with the same hell-spawned horrors and action of the base game. Each level was created by independent designers and supervised by id Software.