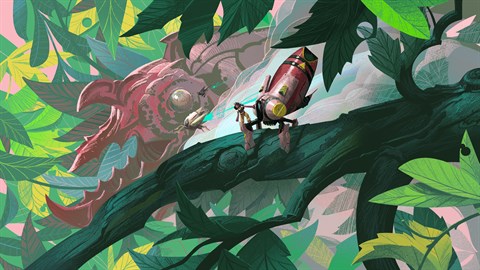 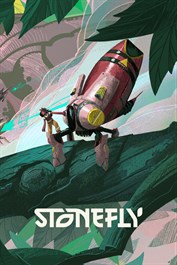 Stonefly is an action-adventure RPG in which you pilot a tiny robot mech in a magical forest. Hop along rocks and leafy canopies while you upgrade your rig with an arsenal of air and wind abilities. Follow the journey of Annika Stonefly as she attempts to recover a stolen family heirloom, strategically battling bugs and critters across an epic story. The mechs in Stonefly are unlike any machine you’ve piloted before. Flip what you know about games and spend most of your time gliding instead of walking. This allows you to traverse a variety of terrain and avoid the dangerous bugs that crawl around below you. Invent abilities that empower you in unique king-of-the-hill style combat centered on using wind to push bugs out of the arena. Each bug has its own behavior and requires a different strategy to defeat. The more efficient you are at dealing with bugs, the faster you will gather precious minerals used to upgrade your mech. Stonefly is set to a backdrop of beautiful colors and the techno-nature music of Natureboy Flako. Forge relationships with memorable characters from the Acorn Corps, a band of castaway mech pilots. Adventure through leafy autumn canopies, prickly briars, and misty marshes.