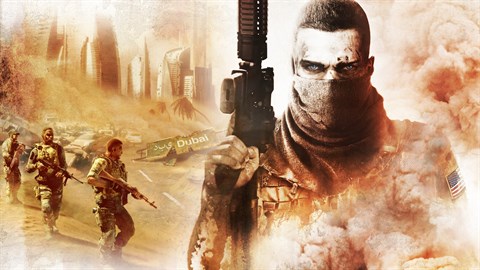 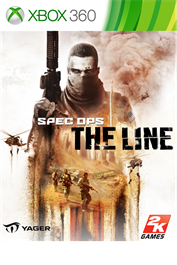 (Online Interactions Not Rated by the ESRB) The Games on Demand version supports English, French, and Spanish. Download the manual for this game by locating the game on http://marketplace.xbox.com and selecting “See Game Manual". It’s been 6 months since Dubai was wiped off the map by a cataclysmic sandstorm. Thousands of lives were lost, including those of American soldiers sent to evacuate the city. Today, the city lies buried under sand, the world’s most opulent ruin. • A new portrayal of the military shooter experience with twisting narrative uncertainties. • Action packed 3rd Person Shooter gameplay provides an up-close and personal view into the brutality and emotion within the combat. • Command an intelligent and powerful squad of Delta-Force soldiers in a dangerous and unpredictable combat zone. • Cross “The Line” in a mature story that explores the dark side of war, where there are no bright outcomes, only bad or worse choices. • Unique Dubai setting strikes the imagination and transports players to a larger-than-life playground for vertical gameplay and stunning visuals. • Sand-filled Dubai provides new gameplay experiences including sand avalanches, and powerful, disorienting sandstorm combat. • Customizable, Class-Based, Blazing Multiplayer