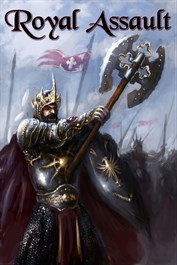 Royal Assault is a real-time tower defense game set in a medieval fantasy setting. Your people are under attack and you must fend off the invading armies by building towers. Choose the quick-firing Archer Towers to quickly dispatch flying enemies, the hard hitting Mage Towers to penetrate the armor of your toughest foes, the explosive Artillery Towers to do area damage to all ground-based enemies, or opt to build Barracks instead which train soldiers who can stop enemies in their tracks by engaging them in combat. When fully upgraded, each of the four towers have branching options. For example, Archers can be trained to fire poison arrows, or they can be trained to fire wounding arrows that permanently slow down all walking enemies. You also have special abilities you can use at any time to stop the invading army from making it through your defenses. Royal Assault is styled after popular mobile Tower Defense games, but was built from the ground up for home consoles. The controls are completely built around use of a gamepad and all visual elements were optimized for an HDTV.