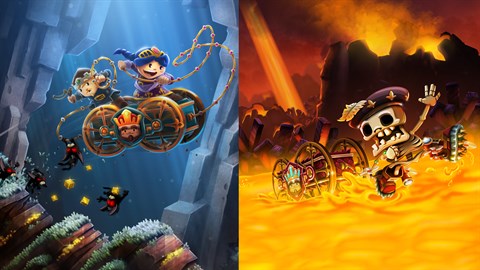 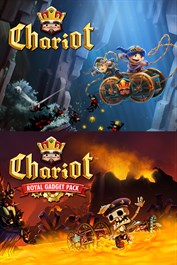 The Chariot Bundle includes Chariot and the Royal Gadget Pack DLC. Embark on a journey to take His Majesty on the ride of His afterlife. Guide a chariot containing the King's remains through underground caves using physics-based mechanics such as pushing, pulling, riding and swinging. Alone or with a friend, lead the brave Princess and her faithful Fiancé into the royal catacombs to find the perfect resting place for the King! And that’s not all! The Shopkeeper joins the action, bringing along 5 new gadgets! Play as the Shopkeeper in solo or co-op and try out new technology delivered straight from the royal engineers' workshop! Walk on ice, light up the darkness, swim in lava, freeze the world, teleport the Chariot through time and space, and much more! Also includes new achievements and blueprints hidden throughout existing levels. Help His Downloadable Majesty to rest in peace already!