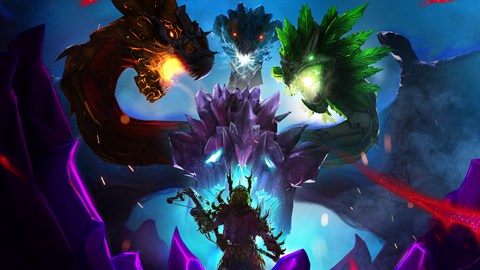 Unleash elemental fury as the all-new Blightcaller! Shattering Spectreglass introduces an additional Fatemaker class, a bevy of customization options, and an enormous, multi-headed wyvern to hunt down and destroy! Unlock and enjoy new content, including: • The new Blightcaller class, an elementalist with a unique talent tree and two fresh Action Skills • New options during character creation including the Grim personality and additional backstories • New boss: Redmourne the Trivern, with four powerful forms that unlock over time • New loot to collect, including weapons, gear, and cosmetic items • Additional environments that, once beaten, can show up in the randomized endgame dungeons of the Chaos Chamber Command elemental forces as the new Blightcaller class The Blightcaller wields the noxious essence of swamps with potent precision, suffocating foes in tempests of poisonous Plaguestorms and summoning vengeful spirits from their Bog Totem turret. At the crossroads of life and death, rot and bloom, the Blightcaller thrives. Expand character creation with more options The Blightcaller adds even more Multiclass possibilities, giving powerful new build options to explore and perfect. Shattering Spectreglass also introduces more ways to customize your Fatemaker, adding the new Grim voice personality and four more stat-modifying backstories. Help Vesper find closure by tracking down a gigantic, soul-stealing wyvern in the fourth Mirror of Mystery Shattering Spectreglass offers a window into Vesper's own memories, which are plagued by visions of Redmourne the Trivern. This mighty beast can grow multiple heads and feeds on fear, siphoning its power from lost souls. Bringing down this winged behemoth once and for all is the only way to help Vesper escape her past. Access to Shattering Spectreglass and other Mirror of Mystery content is granted by the Tiny Tina's Wonderlands Season Pass or individual purchase. The Season Pass itself is included in the Chaotic Great Edition and can also be purchased separately. Base game required.