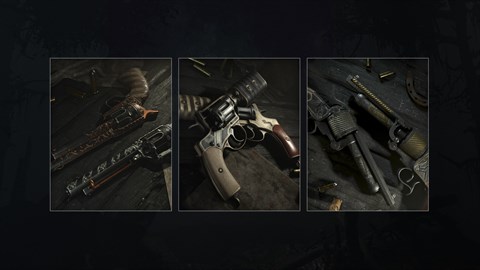 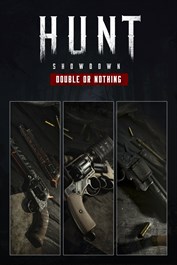 Hunt: Showdown - Double or Nothing

Double or Nothing includes six weapons. Particularly suited to dual-wielding, you can use them in pairs or separately as one-handed-weapons. The six deadly guns of this DLC are: - Ethyl (weapon) - Jana (weapon) - Dusk (weapon) - Dawn (weapon) - Jekyll (weapon) - Hyde (weapon) Jekyll This Caldwell is one of two that toe the line between dark and light, evil and good Jekyll fires in the name of justice, but needs Hyde to counterbalance it. Hyde As a reflection on the duality of man, the second Caldwell is Hyde, an instrument of revenge, murder and spite, that needs Jekyll to temper its extremes. Dusk This Nagant Silencer is one of two that mark the edges of the dark. Dusk shines bright as Arsu, God of the evening star, yet will always be defined by the arrival of Dawn. Dawn The second Nagant Silencer is named after the dawn, that shines bright as Azizos, God of the morning star, yet will always recede to allow the arrival of Dusk. Ethyl One of two LeMats designed in honor of the hard-riding, quick-shooting, stagecoach-roping twins of Wild West touring show legend. Ethyl is the bolder and brasher of the two, but will always need Jana to think things through. Jana The second LeMats is designed in honor of Jana, the smarter and cooler of the two. Still she will always need Ethyl to leap before looking.