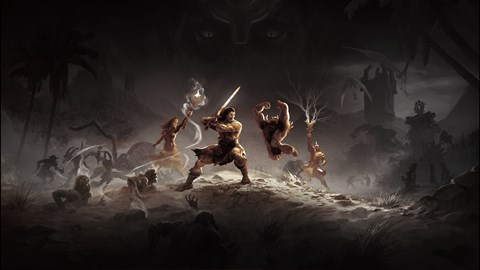 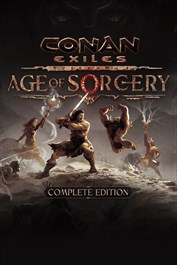 Get your hands on the complete Conan Exiles experience with the full game, now with sorcery, the Isle of Siptah Expansion, and all DLCs! Conan Exiles – Complete Edition contains: • Conan Exiles • Isle of Siptah • People of the Dragon Pack • Architects of Argos Pack • Riders of Hyboria Pack • Debaucheries of Derketo Pack • Blood and Sand Pack • Treasures of Turan Pack • The Imperial East Pack • Jewel of the West Pack • The Savage Frontier Pack • Seekers of the Dawn Pack • The Riddle of Steel Conan Exiles is an online multiplayer survival game set in the lands of Conan the Barbarian, now with sorcery. Enter a vast, open-world sandbox and play together with friends and strangers as you build your own home or even a shared city. Survive freezing cold temperatures, explore loot-filled dungeons, develop your character from scavenging survivor to mighty barbarian and powerful sorcerer, and fight to dominate your enemies in epic siege wars. Conan Exiles can be experienced in single-player, co-op, and persistent online multiplayer. Isle of Siptah is a huge expansion to the open world survival game Conan Exiles, featuring a vast new island to explore, monstrous creatures to slay, building sets to explore, and a host of new features. The DLCs add a ton of new content, such as unique building pieces, emotes, mount skins, pet skins, weapons, armors and much more. The packs allow you to build great and exclusive strongholds with a host of new looks from the different cultures in the world of Conan the Barbarian. Build mighty castles from Nemedia, elegant temples from Argos, opulent palaces from Turan, fortresses from Khitai, cozy taverns, handy stables, or gladiatorial arenas. Conan Exiles – Complete Edition does not include the Battle Pass.