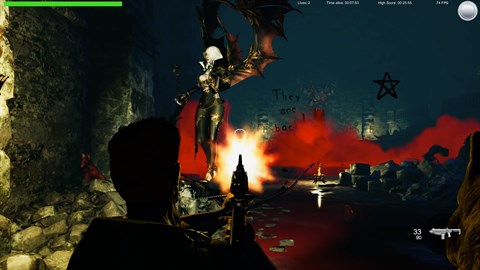 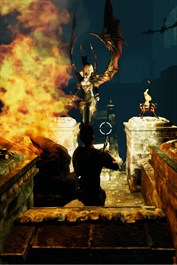 IMPORTANT REMARK: THIS GAME RUN ONLY ON XBOX SERIES S/X !!!! Mysterious incidents were reported in abandoned locations. The Gate of Hell has been opened and demons are troubling here. Ram Ganger, special agent of WOM, arrive to send the brood of evil back to hell. You landed in the middle of the Demons Apocalypse, try to stay alive as long as possible. The good news: You don't have to crawl into hell to fight the demons, the demons come to you in places such as the Chateau, Palace, Pandora, Laketown, abandoned castles, etc. The usual dark caves and tombs are of course also present. Don't look for the demons, the demons will search and find you. Search for ammunition to stay alive as long as possible. Use the weapons properly: Strong weapons for strong demons, flamethrowers for flying demons, etc. Move through the map and collect ammunition and extra lives. You start with a limited number of lives and ammunition. Ammunition and extra lives are spawned after some time. With every minute you survive, the game becomes more difficult, every minute more demons attack you and you find less ammunition and extra life every minute. Once all your lives are exhausted, the battle for survival is over for you. You can win Ingame Awards on each map: Bronze if you survive 10 minutes, silver if you survive 20 minutes. The best of the best win gold after 30 minutes. Furthermore, 3 dragon eggs are hidden in each map. If you collect them, they will be shown in the right ride of the screen under the Time Ingame Awards. REMARK: THE AWARDS ARE ONLY INGAME AWARDS, NO XBOX LIVE AWARDS/TROPHYS ARE AVAILABLE !! Features: - 15 Maps, 2 of this Maps are random generated Dungeons - Sexy vampire women who kill you - Zombie granny on Ecstasy - Tranfeminine, lesbian werepig - Funny splatter, dismemberments and physics effects - Special weapons for exorcising demons: Multi Rocket launcher and Flamethrower Boomshot for short distance splatter and dismemberment. The Reaper do this job on the long distance. With the Desouler you shoot the souls out of the demons. - Demons of Color: Green lizards and green weresnakes. Blue-grey weresharks and multicoloured insectoids, rose werepigs, brown werewolves and flesh colored, naked vampires. Reddish-brown fire-breathing dragons. Grey decayed zombie Grandmothers with pitchfork. Lava colored exploding devils. - No lengthy tutorials necessary: ​​choose your weapon and start shooting ("Roarrr....BOOM") - An average of 15 kills per minute If the game is to hard for you the first time, then try Difficulty level Easy first (available in the Settings Menue).