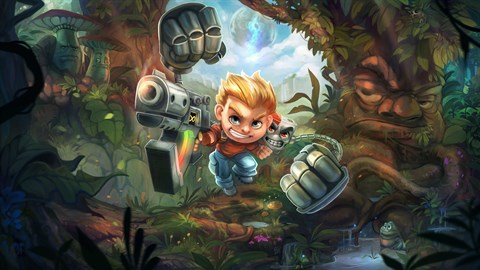 Rad is a rambunctious but spirited young boy who maybe plays too many video games. After dozing off at the tail end of a long night of gaming, Rad awakens to find his dusty old console has turned itself back on. Suddenly a vortex emerges and he's sucked into his TV, where he finds himself the star in his very own video game adventure. The game brings back the 90's-era platformer with a game inspired by classics like Commander Keen, Conker, Ruff'n'Tumble & Jazz Jackrabbit. Features Weapons: Dusty arms Rad with seven radical weapons. Sounds & Music: Andrew Hulshult has created an amazing and authentic soundtrack for the game complete with MIDI-inspired music... And synthesizers! The Pixelverse: While Rad and Dusty are a great team, only Dusty can enter the electrified Pixelverse -- a dangerous spacetime-breaking region that exists beyond the game world. Classic Easter Eggs: The game features hard-to-find collectibles in sometimes even harder-to-find classic secret rooms.