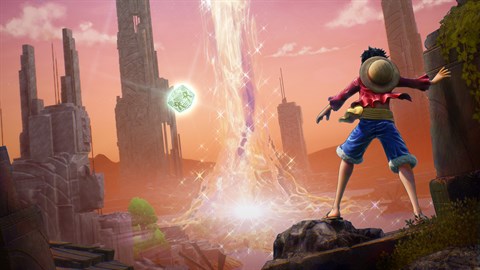 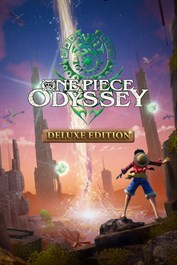 This set features useful items and the additional costume Traveling Outfit Set, all of which can be used in-game. Includes: • Energy Apple x 10 • Excite Apple x 10 • Golden Jelly x 3 • 100,000 Berries • Traveling Outfit Set (Luffy, Zoro, Sanji, Usopp, Nami, Chopper, Robin) *Full game is is required. Please update to the latest version before use. *Please note that bonuses may be distributed at a later date. *Contents and specifications are subject to change without notice. *Some scenes and performances in the game may not reflect the costume changes. *Bonuses can be obtained from the start of the game. Includes: • Main Game • Adventure Expansion Pack • Adventure Expansion Pack Bonus 100,000 Berries • Deluxe Edition Bonus: Sniper King Outfit Set A new RPG from the hugely popular manga and anime series ONE PIECE, commemorating the 25th anniversary of the series! The famed pirate, Monkey.D.Luffy, better known as Straw Hat Luffy, and his Straw Hat Crew, are sailing across the New World in search of the next island and the next adventure that awaits them. But during their voyage they are caught in a storm and shipwrecked. They find themselves washed up on a lush tropical island surrounded by constantly raging storms... Separated from his crew, Luffy sets off on a grand, new adventure to find his friends and escape the island! Dangerous new enemies, terrifying forces of nature, and more await them! Play as various members of the Straw Hat Crew in a classic RPG set in the world of the popular ONE PIECE anime! *In addition to this product, ONE PIECE ODYSSEY base game and other digital content is also available. Take care to not make duplicate purchases. *Deluxe Edition content will be available at game release except for the Adventure Expansion Pack which will release at a later date.