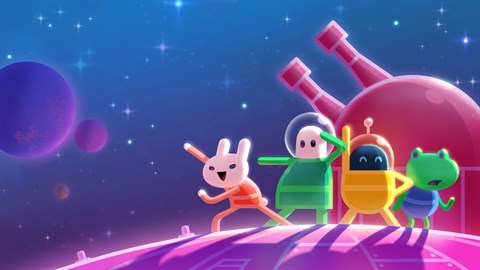 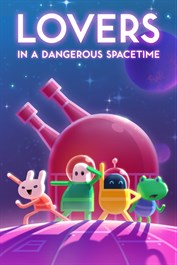 Lovers in a Dangerous Spacetime

"Lovers in a Dangerous Spacetime reminds me why I love video games." 10/10 –Destructoid. Explore a neon galaxy in your very own battleship in LOVERS IN A DANGEROUS SPACETIME, a thrilling 1- to 4-player couch co-op adventure. Take control of turrets, lasers, shields and thrusters, using teamwork to triumph over the evil forces of Anti-Love. Deep space is a dangerous place, but you don’t have to face it alone! CO-OP GAMEPLAY Team up with up to three friends (or an AI space-pet) to man the different battle stations. All players fill important roles at all times, and nobody gets left behind. UPGRADEABLE SHIPS Find and combine powerful space-gems to customize your ship's weapons. Each gem gives different abilities, letting you learn the right tools for every situation. SIMPLE CONTROLS, DEEP CHALLENGE Controlling your spacenaut is so simple that anyone can jump in quickly, but getting all players to work together like a well-oiled machine, battling a galaxy of evil robots – that’s the tricky part. WITH LOVE FROM OUR FRIENDS Lovers in a Dangerous Spacetime was lovingly supported by The Gold Egg Project, the funding arm of The Behemoth, makers of Castle Crashers Remastered and BattleBlock Theater. The downloadable version of this game supports English, French, Italian, German, Spanish, Portuguese, Russian, Japanese, Korean, Chinese.