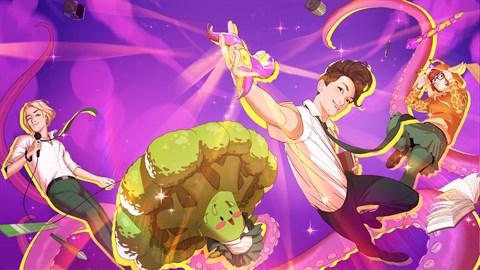 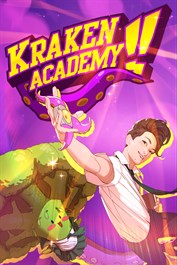 Make friends, free spirits and make sure that the world doesn’t end! Welcome to Kraken Academy, a technicolor fever dream that for legal reasons can only be described as "technically a school." Join forces with a magical kraken to save the world! Kraken Academy is no ordinary high school. Ghosts fill the art department, cultists meet below the monkey bars and now crocodiles are eating children. Join forces with a magical Kraken to save the school (and the world) from the dastardly deeds of the Traitor, a malevolent mastermind who could be anyone on the campus grounds! EXPLORE AND INVESTIGATE While saving the world is definitely an important goal there's a whole range of other activities to dive into. Learn teachers’ and students’ routines as you explore every corner of the campus during this three day loop. Attend a costume party, become a detective, and help the school's janitor bring down a crime syndicate. JOIN A CLUB Kraken Academy is split into four clubs: Music, Art, Sports and Drama: 🎸 Join the alternative Music Club and complete the school’s edgiest rock band. 🎨 Flex your creative flair in the Art Club and show off your work at an exhibition. 🏅 Compete in challenges to become the ultimate warrior in the Sports Club. 🎭 The Drama Club may be full of snobs, but if you can't beat 'em, join 'em! Who knows, you may even become a star in their next extravagant play. Lucky for you, your amulet will let you join them all! MEET AND MINGLE Kraken Academy is a melting pot of wacky personalities. In the Music Club alone you will meet pretty boy and lead vocalist, Vladimir, who struggles with keeping his hysterical fangirls at bay; ill-tempered bassist, Simona, always seen in her giraffe hoodie, who hates everyone (including you); and Broccoli Girl, the drummer, who just can’t get over her ex. So come on! Grab your uniform, lunch money, magical amulet and ignore the voice in your head that says this is a terrible idea!