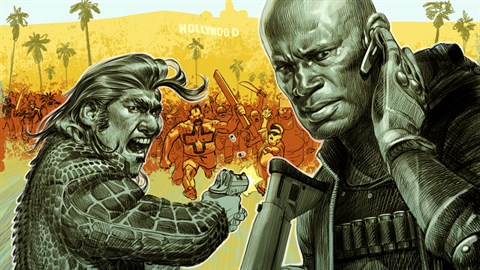 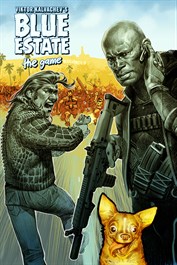 Blue Estate is a darkly funny on-rail shooter based on the comic books from Viktor Kalvachev. WELCOME TO THE FIRST NEXT GEN RAIL SHOOTER! Using Kinect for Xbox One motion detection capability, Blue Estate offers previously unmatched immersion into the mafia world of Los Angeles, packed with humour, original gameplay and incredible fun. In Blue Estate you will play Tony Luciano, the psychopathic son of the Italian mafia godfather of LA and Clarence, an ex-Navy SEAL, penniless and now a hit-man bent on cleaning up the mess started by Tony. As Tony launches a personal vendetta against the Sik Brother’s gang in an attempt to save his best dancer, Cherry Popz, Clarence wants to end the gang war, taking him to the farthest corners of Jamaica! A RAIL SHOOTER GAME TAILORED FOR KINECT FOR XBOX ONE ! Thanks to an intuitive gameplay tailored for Kinect for Xbox One motion detection helps you live out the most extreme rail shooter experiences as you confront unforgettable enemies ranging from the mafia golfer packing grenades to the ultimate crime boss, both as funny as they are unlikely! Bloodshed is always better when shared, so invite a friend to join the massacre, through a nervous cooperative mode! The first next gen rail shooter adapted from the Eisner Award nominated graphic novel, Blue Estate by Viktor Kalvachev. Original and intense fun gameplay that takes full advantage of the Kinect sensor. *2 game modes: STORY MODE - 7 adrenaline-packed missions ! ARCADE MODE - where you combine headshots with combos in a race against time! *2 players in local multiplayer: relive all the levels in an intense cooperative mode! *A sophisticated scoring system for comparing your scores online and 23 achievements to unlock. *Playable with Kinect for Xbox One or with Xbox One Wireless Controller. The downloadable version of this game supports English, French, German, Spanish.