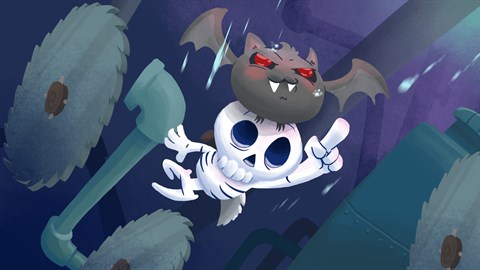 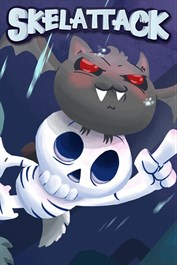 Play Skelattack and save the Underworld in this fun and unique action platformer! Being dead is not so bad when you have the Underworld to live in. A magical and expansive world inhabited by quirky, charming and sometimes deadly inhabitants of the afterlife, the Underworld also includes Aftervale. Aftervale a happy hub where the dead come to spend eternity and begin to come to terms with their time alive through a Remembrance. For our hero Skully, the day of his Remembrance is shattered by an invasion from the human kingdom above. However, unlike prior attacks by the humans, they do not seem to be seeking gold or other treasure. Instead, they kidnap the Aftervale's elder skeleton Elzedon and then go after the very magic that kindles the spirits of the dead, the Blue Flame. Without the Blue Flame, there is no Aftervale, no existence beyond death. Together with your best bat friend Imber, you will need to jump, slash and flap your way though the Underworld. It's up to you to stop the humans, save the Elder, protect the Blue Flame and confront Skully's own life before coming to the Aftervale. Features: Versatile and fluid platforming. Visually rich art style. Be a warrior AND a skeleton. Fight the Humans before they plunder your un-life! Meet a unique cast of friendly monsters, undead, and make friends along the way. Play as an adorable bat named Imber, she is the best. Take your time, look for secrets, or even try to speed run, Skelattack is fun for all skill levels and challenge seekers. Extensive check point system of Blue Flames to practice your jumps!