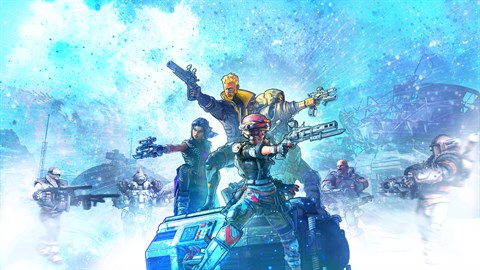 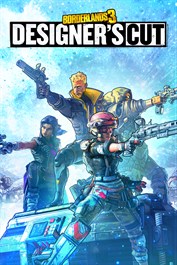 Expand your Borderlands 3 experience with the Designer's Cut add-on content, featuring the all-new Arms Race mode and an additional skill tree for every Vault Hunter when you own this DLC! Arms Race is the galaxy's premier reality murder show, hosted by former Vault Hunters turned ECHOcast commentators: Axton and Salvador. This endlessly replayable mode is a mad dash to gear up your Vault Hunter from scratch and successfully extract the best loot you can find, lest you die and lose it all. Arms Race sees you running rampant across the Stormblind Complex, a decommissioned DAHL military base located on a wintry island that's crawling with enemies and perpetually ravaged by calamitous weather called the Murdercane - short for 'murder hurricane,' naturally. The show begins the moment you're stripped of your gear and dropped onto a random location in the complex, frantically fending off attackers using whatever weapons and gear you can find. Everyone starts Arms Race on equal footing, but only the best will be able to weather the encroaching storm, defeat the final boss, and claim coveted new Legendary weapons and items for keeps. Meanwhile, Vault Hunters looking to broaden their mayhem-making horizons can wield the power of an additional skill tree for each character class, complete with fresh Action Skills to mix up your playstyle. Amara's Phaseflare summons a controllable orb of elemental destruction, FL4K's Gravity Snare stuns enemies so his new Loader Bot companion can blast 'em, Moze fights alongside the adorable, autonomous Iron Cub mini-mech, and Zane vaporizes foes with high-powered blasts from his MNTIS Shoulder Cannon. These abilities and more will be at your disposal to create even more unique Vault Hunter builds that'll demolish anything in your way. This content requires Borderlands 3 to play and is included in Season Pass 2. What's New • Conquer the new Arms Race mode, where everyone starts fresh and must gear up and get out with the best loot - or die trying • Bowl a bloody path through opposition with Amara's Enlightened Force skill tree, featuring Cryo elemental effects and the Phaseflare orb of death • Render enemies helpless with FL4K's Trapper skill tree, immobilizing your prey with the Gravity Snare so you and your Loader Bot companion can get a clean shot • Be the proudest mech mommy with Moze's Bear Mother skill tree, which shrinks Iron Bear down to a self-piloting, still-exceptionally-deadly Iron Cub • Eliminate targets with lethal precision using Zane's The Professional skill tree, sniping faraway foes using the MNTIS Shoulder Cannon and its multiple charges • Expand your cosmetics collection with a new Vault Hunter Skin, weapon trinket, and ECHO Device skins