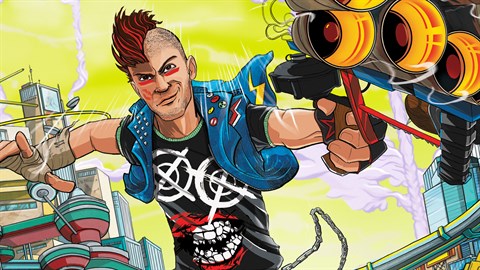 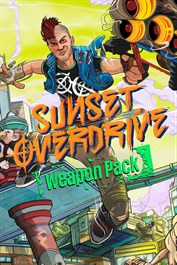 Do not purchase this pack if you already own the Sunset Overdrive Season Pass. In a city overrun by crazed mutants, homicidal robots and villainous thugs, you can never have too many weapons. The Sunset Overdrive Weapon Pack grants you four devastating new weapons for your arsenal. It includes the Rage Bomb, Plague Bomb, Shield Buddy and Multi-lock Rocket Launcher. • Rager: Fires a targeted projectile that, on impact, releases a cloud which induces a confusion status effect, causing enemies to attack their allies. Enraged enemies explode when killed. • Plague Bomb: Fires out an explosive that releases an aerosolized alcohol mix that instantly intoxicates enemies in the area. Enemies stop to vomit, take damage over time, and explode when killed. Exploding enemies will also spread the disease. • Shield Buddy: Hold fire button to charge, release to activate a shield and deploy bombs. Use weapons or melee while you and nearby friends are protected by the shield. • Multi-lock Rocket Launcher: Lock on to up to eight targets, then release to fire out a barrage of rockets at the targets.