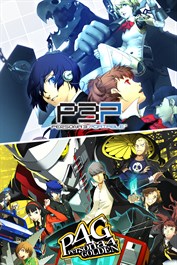 From the Midnight Channel to the Dark Hour, two iconic Persona titles return! About Persona 3 Portable: Experience the iconic, critically acclaimed RPG that reinvented the Persona series, Persona 3 Portable, now newly remastered for modern platforms. Shortly after transferring to Gekkoukan High School, the protagonist encounters the "Dark Hour." Unfamiliar stillness swallows the city, people turn into eerie coffins, and otherworldly monsters called Shadows swarm. When they are attacked by one of these Shadows and all hope seemed lost, the power of the heart, their Persona is awakened. With this newfound power, they pursue the truth of the Dark Hour and face the destiny that awaits them. Key Features include: -Enjoy Persona 3 Portable now with newly remastered graphics, improved smoothness in gameplay, and quality of life features including difficulty selection and quick save functionality - Climb the looming tower of Tartarus, take down powerful Shadows, and investigate the mysteries of the Dark Hour - Live through a full school year packed with daily events as you forge precious bonds with unforgettable characters - Experience this dark, emotional journey through two distinct protagonists’ perspectives for twice the social possibilities -Choose between Japanese and English VO About Persona 4 Golden: The world-renowned Persona 4 Golden promises unforgettable adventures, meaningful bonds, and heartwarming experiences shared together with friends. They say your soulmate will appear if you stare into a television set on a rainy night… This strange rumor slowly spreads through the rural town of Inaba, the protagonist’s new home, just as a chain of mysterious murders begin. As the protagonist and his teammates chase after the truth, they find themselves opening the door to another world. Key Features include: -Explore otherworldly dungeons, take down monstrous Shadows, and confront the darker sides of one's self as you inch closer to the truth behind the serial murder cases -Venture around the town of Inaba, partake in an eventful school year, meet kindred spirits, and forge invaluable bonds -New quality of life features including improved graphics and smoothness, difficulty selection and quick save functionality -Choose between Japanese and English VO