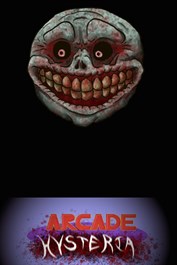 After sneaking into an arcade late at night, you find yourself trapped in an old game called Hysteria! Dodge enemies in Hysteria while collecting powerups to stay alive in this endless runner. How long can you last in the arcade? Tap or press any button to jump and double jump. The goal of Arcade Hysteria is to keep your sanity as long as you can, as indicated by the top-right Sanity Meter. When the Sanity Meter is at 50%, the graphics will change and the game speed will be faster. When the meter hits zero, the game is over. Jump on enemies and collect hearts to regain sanity. The mask powerup allows you to take a single hit without losing any sanity, at the cost of losing your mask. You lose sanity constantly and by enemies running into you. To get a high score in Arcade Hysteria, make sure you never miss a heart Powerup and always jump on enemies! Arcade Hysteria was originally developed in 72 hours during the 2015 Indies vs Gamers horror game jam and is now available on Xbox One for free! AJ Ryan is the game designer and programmer, James Ruschman is the game artist, and Ryan Froehling composed the music.