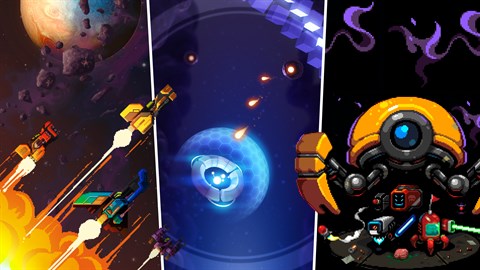 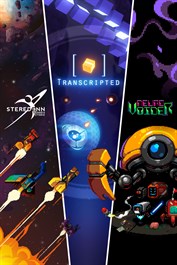 Steredenn + NeuroVoider + Transcripted = explosions! Kaboom!! Get these three exploding games in this fantastic indie bundle, at a discounted price! --- Steredenn: Binary Stars is an award-winning mashup of a classic shmup and a rogue-like, carved in big beautiful pixels, with insane boss battles. Fly solo or co-op with a friend, fighting off the worst scourges of space in a never-ending struggle for survival. Endless chaotic space shooter. Ruthless roguelike inside. --- NeuroVoider* is a twin-stick shooter RPG set in a cyber futuristic world about brains shooting around evil robots with nuclear rocket launchers. Battle through the horde of vigilant robots, boost your character with the smoking remains of your victims, and defeat the master NeuroVoider to end this eternal war. Play it coop with up to 4 friends, or go alone in an adventure of hack'n'slash rampage, with a pinch of rogue-lite, and some permadeath.  * may contain explosions.  --- Transcripted is a mixture of two incredibly addictive and vastly popular casual gaming styles: the dual-stick shooter and the match three puzzle game. In Transcripted players take control of the Nano Probe, a microscopic apparatus used to combat disease. Many weapon and ship upgrades allow players almost limitless customization options for their Nano Probe. Successfully navigate through hordes of deadly pathogens to destroy the disease’s pseudo-DNA and defeat gigantic boss.