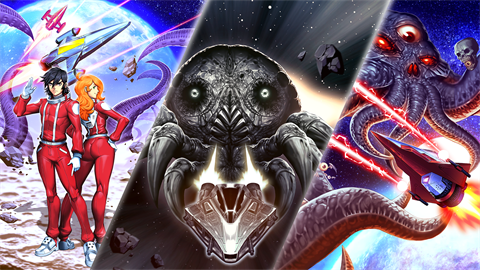 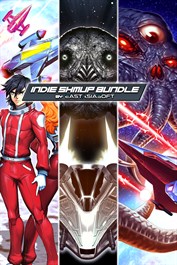 The Eastasiasoft Indie Shmup Bundle contains three great indie shoot'em ups for one fantastic price. The following games are included in this bundle: • Project Starship • Red Death • Null Drifter About Project Starship: Take the role of Garret or Gwen, pilots charged with saving their world from an ancient evil. Evade, adapt and survive randomly generated challenges that are never the same twice. Take down gods and demons alike in unpredictable bullet hell shoot 'em up action, and dive deeper to confront the hidden eye that watches over all! About Red Death: Blast through waves of arcane enemies and take down monstrous bosses as you defend the earth against an unknown calamity. As a prologue to Project Starship, vertical bullet hell shoot’em up Red Death sets a collision course against a full-scale invasion bent on eradicating humanity, presented in nostalgic 4-tone style! About Null Drifter: Blast into a 1-bit lo-fi simulation that will gradually train your skills up to become the ultimate space-fighter pilot! Secretly part of the Project Starship world, this twin-stick shooter is designed to prepare pilots for their mission against the awakened forces of the void. By slowly introducing new challenges and more frenetic battles, the Null Drifter simulation will push the limits of any pilot to the next level!