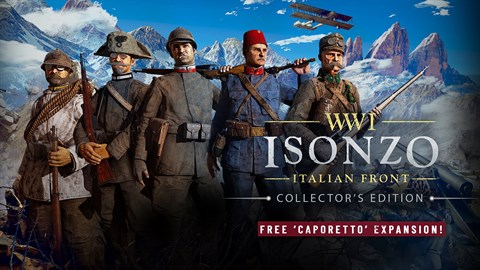 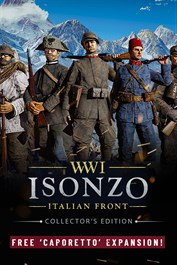 World War One expands to the mountains of the Italian Front - beautiful but deadly in equal measure. Inspired by the two year struggle for control of the Isonzo river valley and the Alps during World War One, Isonzo elevates the WW1 Games Series, figuratively and literally. The Isonzo Collector's Edition includes a huge array of visual customization options: 140 items from four DLCs: ‘Elite Units’, ‘Veteran Units’, ‘Reserve Units’, and ‘Alpine Units’. With dozens of uniforms, accessories and mustaches to choose from, you can really stand out on the battlefield. The ‘Elite Units’ pack contains new historic uniforms for each class. The Italian uniforms include Bersaglieri Cyclists and Arditi troops, while the Austro-Hungarian uniforms include the feared Bosnian troops. Additionally the pack contains five iconic mustaches and three facial items. The ‘Veteran Units’ pack contains battle-scarred uniforms for each class. The Italians get the hardened Sardinian "Sassari" uniforms, while the Austro-Hungarians get a Hungarian Honved uniform alongside veteran trench fighters including the Sturmtruppe Hauptmann. This pack comes with five iconic mustaches and four facial items. The ‘Reserve Units’ pack contains rear-line uniforms for each class. The Italian uniforms include the infamous "Carabinieri Reali" police units and their archaic hats, while the Austro-Hungarians get the venerable "Standschützen". The pack comes with four elegant mustaches and four facial items. The ‘Alpine Units’ pack contains uniforms and gear worn by units in the winter as well as a range of rough beards! Italian troops enjoy white winter camo, while the Austro-Hungarians button up with heavy greatcoats. There are five mustaches and beards, with three facial items, plus one face for each faction.