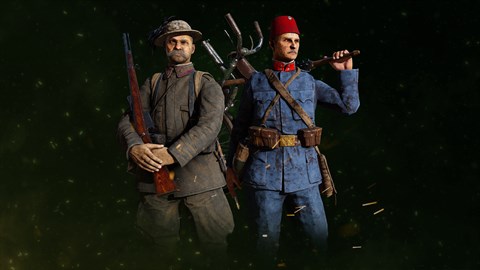 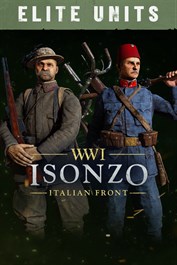 The ‘Elite Units’ pack has some of the most historic units seen on the Italian Front, many of which come with eye-catching specialized backpacks! From Bersaglieri cyclists to the intimidating Austro-Hungarian “Bosniaks” and more, along with five mustaches and three facial items. The ‘Elite Units’ pack contains 34 items: - 6 Italian Uniforms - 4 Italian Headgear Items - 6 Austro-Hungarian Uniforms - 8 Austro-Hungarian Headgear Items - 3 Facial Items - 5 Mustaches - 2 Faces (one per faction) The Bersaglieri cyclists take center stage for the Italian Marksman class, including the folded bike they carried on their back! An engineer with the wire telephone spool backpack is available, as well as Officer and Assault uniforms with shirt-and-tie Arditi uniforms and their famous ""Fez"". The Austro-Hungarians are reinforced by the feared Bosnisch-Hercegovinische Infanterie - the ""Bosniaks"" - for all classes. Both gray-green and pike-gray uniforms are available including the classic ""shortened"" officer tunic. On top of that they also get a range of fez hats. The pack includes five historical mustaches including the recognizable dapper lines of the facial hair worn by several German generals: ""Von Schlieffen"", ""Von Francois"" and ""Erich Ludendorff"", befitting the elite status of the troops. There are also three additional facial items to choose from, including a special set of glasses used for gas masks and more. NOTE: THIS DLC CONTAINS COSMETIC CONTENT ONLY.