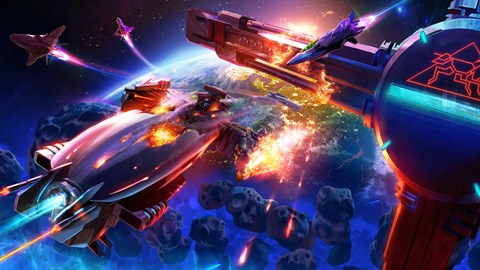 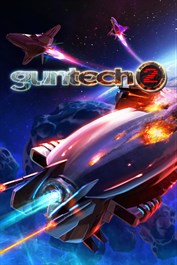 Guntech 2 is a return of the good old “cave flyer” shoot ’em ups genre. It's a retro-style game where state-of-the-art graphics and visual effects are combined with classic gameplay. It’s a twin-stick shooter influenced by such classics as Thrust, Oids, Geometry Wars, and Asteroids. You can play in single-player, or couch co-op with up to 4 players! Guntech 2 is a twin-stick shooter where you use the left stick to steer and thrust your ship, and the right stick to control the railgun. Your ship has a total of three different weapons. The shoulder buttons fire the two additional, more powerful weapons which always fire in the direction of your ship's nose. This gives you the ability to shoot any direction using the railgun, with extra firepower when you position your ship towards the enemy. Gameplay Guntech 2 has 5 distinct worlds: Tutorial, Virus, The Dark Worlds, Space Jungle, and Cargo Hauler. Each world has 8 levels plus a boss level at the end. Additionally, there are seasonal levels that are funny and silly little missions themed for seasons like Christmas and Halloween. You can play either in ARCADE or ADVENTURE mode. The adventure mode lets you play any unlocked level, so you can continue conquering the world from where you left off. You have a fresh set of lives for each level. Each level has three different goals. The first is mandatory for passing the levels and will earn you one star. The other level goals will earn you additional stars, and you can try to clear all levels to 3-star results. The arcade mode allows you to choose any world that has been unlocked, but you always start from the first level, trying to make it to the end. You have a set of lives that doesn't reset for each level, and the game is over when you run out of lives. In the arcade mode, you play for score and a leaderboard position. Weapons There are 20 different weapons. You get the initial weapons when the game starts, and you can earn more by playing. The weapons have different characteristics and it's up to you to figure out which works best for your playing style, and for any particular level. You can acquire new weapons between levels, but you can switch freely between the owned weapons during the gameplay.