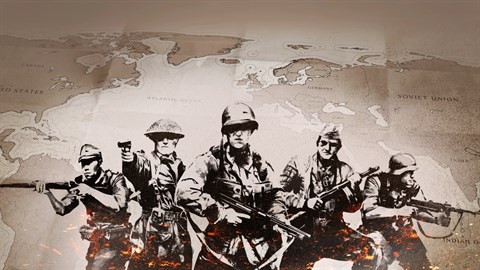 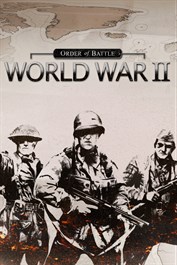 Order of Battle: World War II is a turn-based strategy game with an impressive variety of scenarios and theatres of war. Lead your army through exciting single-player campaigns. Scenario after scenario, you will carry-over your troops from one battle to the next, fighting on all fronts of World War II, from Burma to Finland, from North Africa to the Pacific Ocean. Over 1000 unique unit types are available, as well as commanders, specializations, and a smart supply system. COMMANDERS A set of unique Commanders – split between Generals, Pilots and Captains – is gradually unlocked in the campaigns. These can be attached to specific units to provide unique bonuses to anything in their command range. While good use of unit types and tactics remains the player's priority, clever use of Commanders can tip the balance in an offensive operation or buy just enough time in defense to turn the tide to your favor. SUPPLY SYSTEM In Order of Battle: World War II, a unique supply system also plays a key factor that directly affects the combat efficiency of the units. Landing on an enemy island without any support ships will prevent the invasion forces from building a solid beachhead, and breaking the supply lines of your opponent, isolating his units and making encirclement maneuvers are the strategies required to achieve an ultimate victory. THE BLITZKRIEG CAMPAIGN IS INCLUDED The Blitzkrieg campaign puts you in charge of the German Wehrmacht and Luftwaffe. Starting with the conquest of Poland, the campaign features the defeat of the Franco-British alliance on the western front, the invasion of the Soviet Union and finally the assault on Moscow in 1941. On 1 September 1939, under the pretext of reclaiming the city of Danzig, German armed forces invade Poland. Honoring their diplomatic treaties and driven by the desire to maintain the balance of power in Europe, France and Great Britain swiftly declare war on Germany. This chain of events sets in motion the greatest war the world has ever seen: a Second World War. In the early years of the conflict, Germany displays a successful incorporation of modern aircraft and tank technology into its traditional tactic of Bewegungskrieg. These tactics rely on deep penetrations by armoured forces, supported by aggressive air attacks and prove to be highly effective at encircling and finally destroying the enemy. Resulting in lightning fast victories, the new form of warfare is referred to as the Blitzkrieg. This campaign includes more than 200 units, greatly expanding the unit rosters of Germany, France, Britain and the Soviet Union as well as adding several minor nations to the game. Among the German units are the Panzer III and IV series, Bf109 and Fw190 fighter aircraft and powerful 88mm anti-aircraft guns, while the Allies have access to heavily armoured Matilda and Char B1 tanks, Spitfires, Hurricanes and unique Armoured Train units. 12 Scenarios: Mlawa, Warsaw, Norway, Belgium, Fall Rot, Dunkirk, Yugoslavia, Greece, Minsk, Smolensk, Kiev, Moscow.