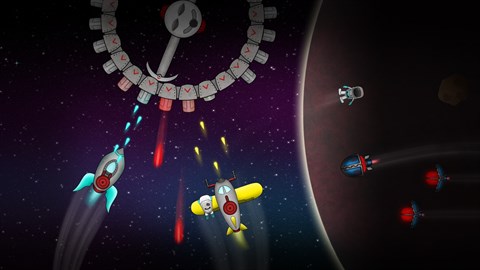 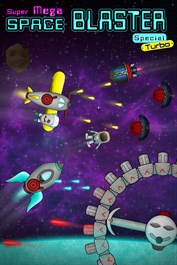 It's 2051. Earth is all but dead, an almost uninhabitable polluted mess of smog and tar. Remotely control space blasters from a dying Earth. Fight in epic space battles against all kinds of weird alien spacecraft. Rescue cute 'blastronauts' from alien capture. Wipe-out the alien forces and take-over their planet to give humanity a new home. Time is running out. Do you have what it takes to become the ultimate space blaster pilot and the saviour of the human race? A modern take on the retro arcade shoot 'em up (shmup). Super Mega Space Blaster Special Turbo is an addictive, fast-paced space shooter with bullet hell elements, loads of unlockables, and leaderboards to climb. The ‘Turbo’ edition of Super Mega Space Blaster Special is the definitive edition giving you more ships, more game modes, more unlockables, more challenges, and more space blasting fun than any ever before. Blast your way through 5 unique game modes including 2 new Turbo edition modes. Save cute astronauts and destroy the boss to claim victory in ‘Save The Colony’ mode. Manage your fuel and ammo to survive to the big-boss in 'Survival' mode. Protect your mothership from damage for as long as you can in 'Protect Mother' mode. Blast your friends into space dust in local competitive multiplayer modes 'To The Death' mode and the new ‘One Shot’ mode. Play alone in single player, or with a friend in local co-op to take out the aliens. Collect coins to unlock more space blasters (ships), upgrade your weapons and power-ups, and explore the shop for extra perks. Complete over 40 fun challenges to get those extra coins. Use each space blaster's strengths to your advantage; from turrets that allow twin stick control, to fast manoeuvrable ships that can outrun your foes. Arm yourself to the teeth with awesome power-ups like big-bombs, homing missiles and lasers. Destroy the alien boss and continue the endless gameplay to rack up a massive score and become the ultimate space blaster pilot and top the leaderboards.