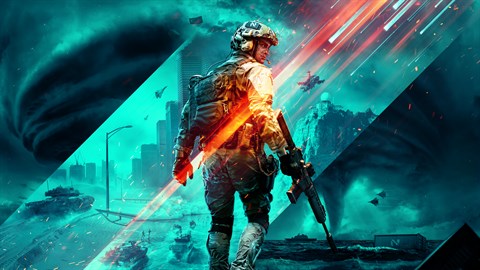 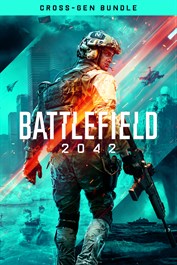 Pre-order* Battlefield™ 2042 now and get: • Irish - Battle Hardened Legendary Skin • Baku ACB-90 melee takedown knife • “Mr. Chompy” Epic Weapon Charm • "Landfall" Player Card Background + "Old Guard" Tag Buy the Battlefield™ 2042 cross-gen bundle and get both the Xbox One and Xbox Series X|S versions. Battlefield™ 2042 is a first-person shooter that marks the return to the iconic all-out warfare of the franchise. In a near-future world transformed by disorder, adapt and overcome dynamically-changing battlegrounds with the help of your squad and a cutting-edge arsenal. With support for 128 players on Xbox Series X|S, and for 64 players on Xbox One, Battlefield™ 2042 brings unprecedented scale on vast battlegrounds. Players will take on several experiences comprising elevated versions of Conquest and Breakthrough, Battlefield™ Portal; a new community-driven platform where players can create, share and discover unexpected battles from Battlefield’s iconic past, present and future, and Battlefield™ Hazard Zone; a tense, squad-focused survival experience where every bullet, every skirmish, and every decision counts. *CONDITIONS AND RESTRICTIONS APPLY. SEE https://www.ea.com/games/battlefield/battlefield-2042/disclaimers FOR DETAILS. NO WEAPON, VEHICLE OR GEAR MANUFACTURER IS AFFILIATED WITH OR HAS SPONSORED OR ENDORSED THIS GAME.