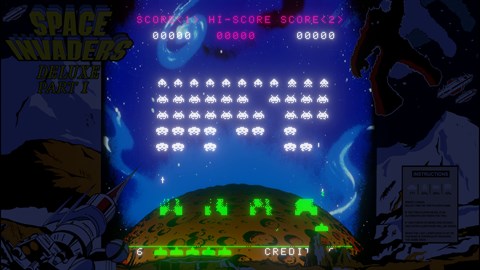 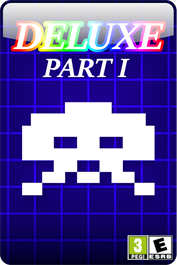 Space Invaders Deluxe Part 1 showcases the first part of the very best in arcade retro gaming that took the world by storm in the late 1970s and early 1980s. Featuring the intense action and hypnotic rhythm of the classic arcade space invaders shooter. This arcade quality presentation, remastered in full HD 1080p for 60 frames per second is the next best thing to having your very own retro home arcade, complete with dimmed lighting and the soft glow of a CRT display. Space Invaders is the featured game meticulously represented in this expansive collection along with three unique Extra Game modes representing other styles of the genre; Space Kings, Alien Invasion and Space Invaders Part Four! Space Invaders (Part I) was the first fixed shooter and set the template for the entire shoot 'em up genre. The goal is to defeat wave after wave of descending aliens with a horizontally moving laser to earn as many points as possible. A UFO flying saucer will sometimes fly above, delivering extra points if you're accurate enough to shoot it. The Extra Game modes all give a new spin to the genre with different graphics, unique gameplay twists and new surprises keeping everything fresh, exciting and challenging so the fun never ends!