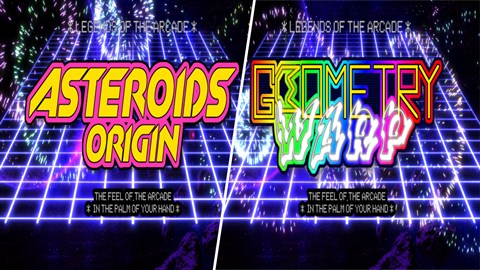 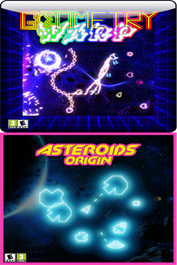 Combo pack includes two full games of both Asteroids Origin and Geometry Warp. Asteroids Origin The arcade quality classic original Asteroids shooter. Asteroids Origin takes Asteroids back to it's origins with arcade quality gameplay, glowing vector graphics and authentic sound and vision. Considered by many as one of the greatest video games of all time, Asteroids is a classic arcade game that was released in 1979 to worldwide acclaim. Using the same basic hardware as an earlier game, Lunar Lander, it took the arcade world by storm, going on to be one of the best selling arcade games of all time. Asteroids had it's origins in the very first video game ever created, "Computer Space" and as such is one of only a small number of early arcade machines that used Vector graphics, the same technology used in oscilloscopes, where electrons are fired directly at the screen to draw the images like a pencil. This differs from every video game and TV screen since, which use horizontal scanlines to progressively build up a picture. The result is a high action, space themed game with sharp, glowing Vector graphics. Legends of the Arcade brings you Asteroids Origin, the complete arcade experience to your XBOX and Windows devices. Geometry Warp Geometry Warp is an old school style twin stick shooter, but remixed for the 21st century with satisfying, spectacular gameplay and next generation graphics...to die for! Playing is simple: you are a geometric "ship" trapped in a grid world, facing off against waves of deadly wanderers, snakes, and seekers. Your aim is to survive long enough to set a high score! Avoid the spawning enemies, and shoot them down for points. Use the emerging blackholes as your aid and group your kills for extra multiplier! The more bad guys you kill, the higher your score multiplier goes (2x, 4x, etc.). The higher your multiplier, the more you can score and the closer you'll be to a bonus life, which you'll need because this is going to become intense!