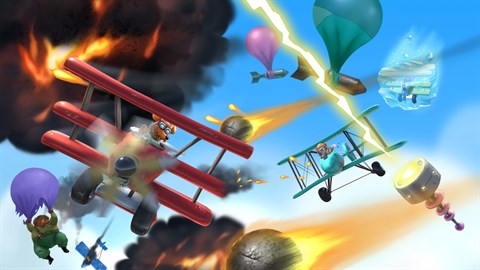 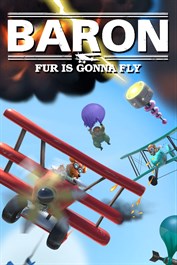 In the world of Baron, the Great War rages on. Aircraft are new, exciting machines that defy gravity! Those who fly them -- those brave animals -- are daring, flamboyant, and impossibly glamorous. Take to the sky in your trusty biplane and join intense battles against other pilots. Up to 8 players can battle either all-on-all or in teams. Arm your aircraft with wonderful weapons that include Giant Anvils, Freeze Rays, or the ever-popular Banana Peel! Flying is easy to learn. (Even non-gamers will be flying in no time.) But under the hood, the aerodynamics have a depth that will take months to master. 4 unique aircraft, with different flight characteristics and abilities. 8 heroic characters- each with their own taunts, insignia and victory song. 13 Special Weapons will keep you busy discovering new ways to destroy your opponents. Single-player game modes include Battle (teams or all-on-all), Training, and a woolly Sheep Attack. So pull on your goggles, strap in, and prepare for takeoff. Fur is gonna fly!