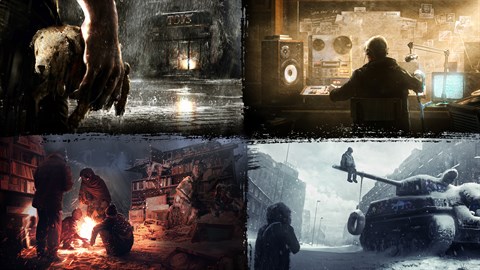 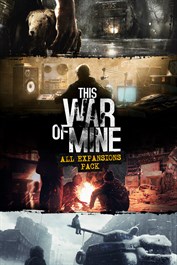 This War of Mine: All Expansions Pack

Expand This War of Mine: Final Cut with three narrative-driven stories, each showing a different look on war: a father trying to protect his daughter, a radio broadcaster learning about the price of truth and a girl looking for the answer to what is more important―the survival of a person or mankind’s legacy, and with The Little Ones DLC exploring the hardships of war seen from a perspective of a child. Father's Promise DLC tells a story of a family’s struggle to preserve the last pieces of humanity in times of despair and cruelty. Become Adam―a father trying to save his daughter from the horrors of war and leave the besieged city. The DLC offers a brand new, distinctive experience with additional game mechanics and several hours of thought-provoking gameplay: - A brand new storyline based on an audio-drama written by the famous Polish author, Łukasz Orbitowski - New shelter - 4 completely new locations - 5 reconstructed and remastered locations - Set of new game mechanics: dialogue and clue searching systems The Last Broadcast explores the role of truth in a time of despair. As a radio operator broadcasting in a war-torn city, face the dilemma of whether there is a line beyond which the truth can be sacrificed. The DLC introduces: - 4 new locations - New shelter - New playable characters - New radio mechanics - New investigating and reporting mechanics - New dilemmas mechanics - Non-linear story with 6 different endings Fading Embers portrays the story of Anja. Living in a warzone and carrying a heavy burden, Anja wrestles with herself to answer the question of what is more important―the survival of mankind’s legacy or the survival of a person. The structure of 'Fading Embers' brings new ways to experience the narrative along with non-linear structure leading to multiple endings based on the player's decisions. Since the main theme orbits around human legacy, new gameplay mechanics introduce collecting art, deciding on its fate and more. Fading Embers’ new mechanics: - New narrative devices - New shelters - New hub area to keep track of your progress - Collection Management mechanics including: - Securing the art collection - Ability to gather new pieces of art - Deciding on the fate of art pieces This War of Mine: The Little Ones explores the hardships of wartime survival as seen from an entirely new perspective―that of a child. This DLC puts you in charge of a group of adults and children stuck in a besieged city, struggling with basic necessities. It focuses not only on the reality of enduring war, but also on how even in times of conflict, kids are still kids: they laugh, cry, play, and see the world differently. In addition to thinking about survival, you'll have to summon your inner child to understand how to protect the little ones. Their youth, and their future, are in your hands: - Protect innocent children - Craft toys, play with kids and be the caretaker they need - Meet new adult civilians in scenarios with children