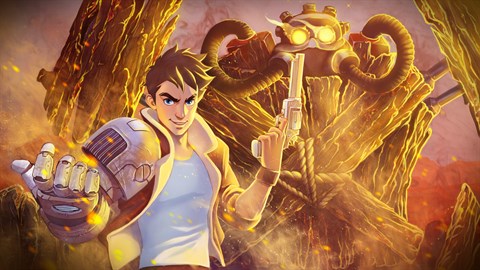 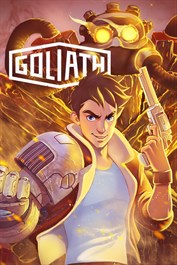 Get Ready For A Giant-Sized Adventure! Welcome to the world of Goliath, an action-adventure about crafting giant robots and punching monsters in the face! After stumbling through a mysterious rift, you find yourself in a mysterious world consisting of the jumbled fragments of a hundred dead civilizations. Ruined buildings from 1930s America share space with wrecked pirate ships and the overgrown remains of spaceships from a far-flung future. Several powerful factions battle for control of this strange and broken land, but even the strongest among them tremble in fear of the monstrous giants that roam the land. Fortunately, you can build giants of your own! Search the world for the items you need to craft tools and weapons, including giant robotic suits called Goliaths that will help you even the odd against the enormous creatures you confront! To survive among the giant creatures in this dangerous and mysterious world, you must scavenge for resources and create Goliaths to battle your life. Starting with simple wooden versions, you will learn to create dozens of Goliaths from a variety of materials: wood, stone, metal and other more unique materials found in the world. Your Goliath can be customized and outfitted with weapons to create options that are perfect for every situation and players’ preferences. But robots won’t solve every problem. You’ll also need to craft items and tools, build shelters and fortresses, and choose which factions to side with in the war that’s sweeping across the land.