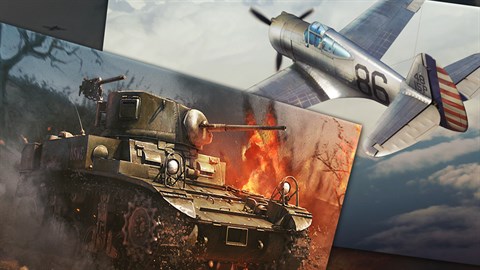 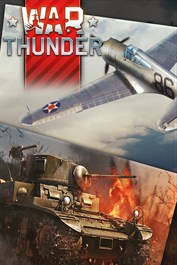 This Bundle includes: M3A1 Stuart (Rank 1 USA); USMC decal; Rasmussen's P-36A Hawk (Rank 1 USA); Premium account for 7 days; 500 Golden Eagles; 120 000 Silver Lions. The M3 Stuart was the first US tank that saw real fighting, and later became the most produced light tank of World War II. The M3A1 is an upgraded version of regular M3 and comes with many improvements. Similar to other US light tanks, the Stuart is extremely mobile and it’s a perfect choice for the quick capture of strategic points in battle. It is equipped with a rapid-reloading 37 mm cannon as well as two machine guns for defending against enemy aircraft and removing the crews of open SPAA vehicles. The exclusive camouflage of this model was used by the United States Marine Corps. P-36A is an American fighter, designed in 1930s. The aircraft's extremely low wing loading gave it outstanding turning performance, and its high powerful engine gave it great speed up to 479 km/h. P-36A equipped with one 7,62 mm gun and one 12,7 mm gun. P-36A “Hawk” fighter of lieutenant Philip M Rasmussen, one of the few American pilots, who managed to take off to protect Pearl Harbor from furious attacks of Japanese planes. All premium vehicles allow you to earn increased Research Points and Silver Lions for each battle and comes furnished with all available modifications. With a Premium account (also purchasable in the game for Golden Eagles) you will earn more Research Points and Silver Lions during each battle for a set amount of days. This is cumulative with bonuses from premium vehicles!