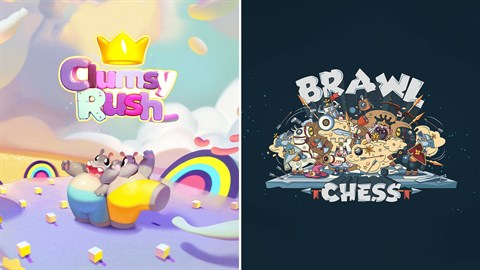 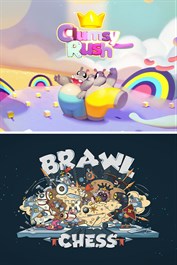 Race through randomly generated tracks, take the crown from your friends and watch how everybody learns the secret art of walking in this sweet party game. The title includes a local mode from 2 to 4 players, two control systems, 23 gameplay modification cards, 27 hero skins and 47 unique track segments. GRAB THE CROWN AND RUN No more exhausting complicated tutorials, no more half an hour's explaining of gameplay nuances—tell your friend “grab the crown and run” and you will be ready to play. Simple rules allow you to start racing immediately. YOU'RE IN CHARGE Do you prefer to use simpler controls to make the race more dynamic? Or maybe go big and use both legs separately for more laughs? Or... turn all the players into ice cubes or throw in a fake crown? Do you want to play as sumo or Santa Claus? Choose a control, one of 23 race modifications and, most importantly, the craziest skin for your champion! EACH TRACK IS UNIQUE Strategically positioned horde of sheep, twisted whirls or tiny windmills with tornado power - these are just some of the many crazy obstacles that will make a mess in your races. Each track is randomly generated from a pool of 47 unique segments. AND EVERYONE CAN PLAY Friendly graphics and simple rules make Clumsy Rush a title that everyone can have fun with. Do you want to chase with your friends who are not players? Play with children? Or maybe just relax? Do not wait—catch a gamepad and run! In this fantasy world, one of the brave heroes leads your chess army to victory. Choose between a mysterious fairy, a dangerous dwarf, a clever elf, a brave prince, and many more. Cartoon visuals make the game friendly to everyone. What’s going on there! Arrows fly above heads and swords break in the heat of battle. Or maybe you prefer classic chess? You can always change your pieces to traditional ones. Brawl Chess - Gambit connects generations in a multiplayer mode, but a single player will also appeal to players of all ages. There are five levels of difficulty. The first is great for kids to learn. The fifth is suited for chess experts who are looking for a serious challenge. Key features: LOCAL MULTIPLAYER. Your family will absolutely love this version of chess. Do you fancy a happy competition between parents and children? It is possible. Invite grandparents too, they certainly know the rules. KIDS-FRIENDLY. It's a game for the whole family, easy to learn and cheerful. Play it regardless of age. Thanks to the vibrant cartoon style, children will also join the fun. BRAIN TRAINING. But in a fun way! Brawl Chess looks modern while still being one of the oldest and most popular games in the world with all its advantages. It increases IQ, improves arithmetic skills, teaches analytical and critical thinking. Train to use both hemispheres of your brain. CREATIVITY BOOST. The fun doesn't have to end after turning off the console. When the father plays as a ghost, and the son plays as a prince, they can perform scenes with these characters after the chess game ends. WHY IS IT WORTH PLAYING CHESS? Mastery of chess is very beneficial for children’s development. It allows them to achieve better and better results in learning by developing skills such as: • anticipating the consequences of their actions • planning in advance • problem-solving • ability to concentrate • critical thinking • logical thinking • memory development