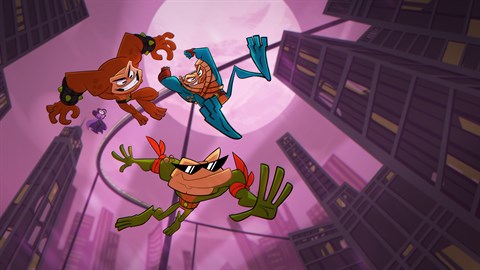 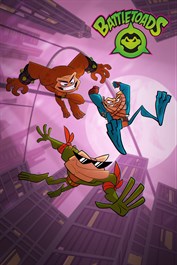 The wait is over! Rash, Zitz and Pimple are returning at last to smash-hit their way through an all-new action-packed adventure of choreographed chaos, and couch co-op may never be the same again. 1-3 players will take control of the Battletoads and team up to storm through wild and unpredictable stages with only one rule – expect the unexpected. Teamwork makes the dream work in a drop-in, drop-out gameplay blast, filled with over-the-top gameplay moments that anyone can enjoy, but only a True ‘Toad’ can master. With a unique hand-animated cartoon style and packed with memorable characters and locations, the Battletoads are back for a larger-than-life brawl across the universe that promises to be fun alone, and unforgettable together. • Action-packed adventure as iconic characters return • Over-the-top combat with combos and hard-hitting morph attacks • Wild, varied gameplay sequences for all types of gamers • Hand-drawn animation feels like playing a cartoon • Drop-in couch co-op for three players • Hilarious story with cinematic cutscenes • Available at launch as part of Xbox Game Pass Critical Response: “Battletoads is back in the best possible way” -- Generación Xbox (Spain) “Without a doubt one of the funniest games of this generation” -- Pure Xbox (UK) “A love letter to gaming past and present” -- Game Skinny “This reboot of the legendarily unfair beat 'em up is toadally radical” -- IGN “An absolutely hilarious good time” -- Game Rant “The best interpretation of the Battletoads yet” -- Press Start “It's more than a retro throwback, it's a crazy new beat 'em up” -- Cubed3