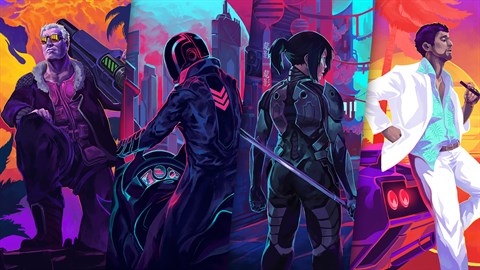 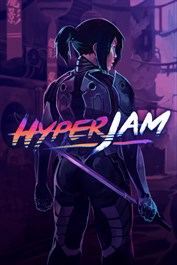 Hyper Jam is a neon-soaked arena brawler with a dynamic perk drafting system that makes each match different from the last. The hard-hitting fusion of lethal weapons, stackable perks, furious combat, and a killer synthwave soundtrack makes Hyper Jam a multiplayer experience that'll keep you coming back for more. - Furious Combat - Hyper Jam features fast-paced multiplayer arena gameplay for 2-4 players. Annihilate your opponents round after round using katanas, rocket launchers, sledgehammers, and more. - Perk Drafting - After every round, players choose new perks that stay with them for the rest of the game, stacking and combining with their existing ones to create more powerful effects. A wide pool of distinctive perks ensures no two games are ever the same. - Local and Online Multiplayer - Grab some controllers and take on your friends at home, or test your skills against the rest of the world in public or private online matches. Cross-platform matchmaking means there are even more challengers for you to face! - '80s Aesthetic - Play as a strong selection of '80s-inspired characters on a variety of beautiful and dangerous arenas, ranging from a sundrenched Miami hotel rooftop to a gritty Neo-Tokyo subway. - Killer Synthwave Soundtrack - An addictive soundtrack featuring Carpenter Brut, Dance With The Dead, Meteor and more will keep hearts racing as you blow each other to bits. - AI Bots - Hone your skills against AI bots before taking the fight online. Customise bot difficulty, game rules and more to create your own challenge.