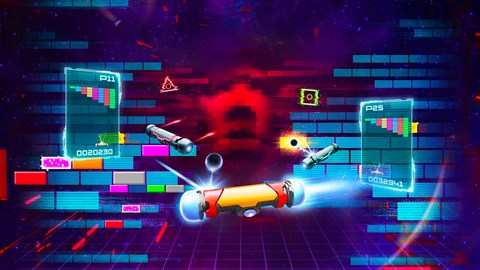 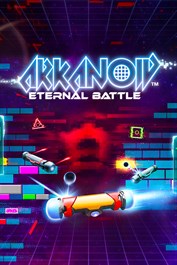 Arkanoid is an iconic arcade game, developed by TAITO Corporation in 1986. When the mother ship ARKANOID comes under attack, the small spacecraft VAUS manages to escape but ends up warped into another dimension. Wandering in an inter-dimensional labyrinth, VAUS must destroy blocks called ""spacewalls"" in order to defeat ""DOH"", the creator of the maze responsible for ARKANOID’s destruction. Arkanoid – Eternal Battle, developed by the talented French studio Pastagames marks the return of the iconic block breaker game. For the first time ever, players will be able to compete against each other, offering an online experience thanks to the Eternal Battle mode, the main new feature of this game, brining the arcade experience to a whole new level. This Battle Royale mode offers the possibility to compete among 25 players online. Arkanoid is one of the most accessible, if not, the most accessible game in the history. The concept remains simple, but you'll will face level after level an increase of progressive difficulty. Features: - A brand-new artistic direction and new surprising features, items and powers, conceived by the famous French Studio Pastagames. - 4 GAME MODES, including: 2 single-player modes (Neo & Retro) and 2 multiplayer modes, Local Versus and Eternal Battle - NEO (1-player): A new game mode. Same Gameplay as the classic Arkanoid Game with new power-ups and new spacewalls - RETRO (1-player): Discover a part of History through a vintage Arcade Cabinet - VERSUS (2-4 players): Players competing on the same screen (split-screen) based on the Neo mode gameplay - ETERNAL BATTLE (25-player): Players competing online, the last player standing wins the game. Champions can use special powers to take the advantage during the game. - High Replay-Value, thanks to the new "Eternal Battle" mode, play online and face opponents around the world - Adaptative and progressive original soundtrack, composed by Xavier Thiry - Dedicated online leaderboard in the 3 main modes (Neo, Retro, Battle Royale) will be available at launch, highlight the players' highest scores