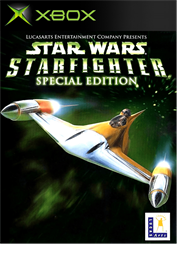 Star Wars: Starfighter™ Special Edition takes you on an epic journey that begins on Naboo and continues through the climactic assault on a Droid Control Ship. The game takes full advantage of the robust Xbox graphic capabilities and features more than 20 beautifully rendered, 3-D starships amidst 14 incredible environments set in air and space. Join three heroic starfighter pilots in a series of harrowing missions to save Naboo and the galaxy from the oppressive abuses of the Trade Federation. May the Force be with you, young Starfighter pilot! В эту игру нельзя играть на консоли Xbox 360.