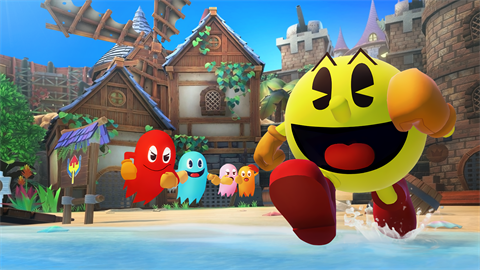 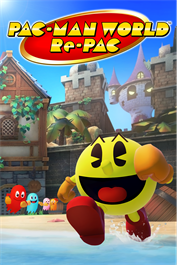 PAC-MAN World Re-PAC is a remake of the 3D action-adventure game released by Namco in 1999. The feel of the world has been retained with improved graphics, so it's even easier to play and even has new elements. New surprises await players of the original game reliving the nostalgic adventure, and those new to Ghost Island, around every corner. PAC-MAN's adventure is set on Ghost Island, and begins when he sets out to save the PAC-MAN Family from the evil robot, Toc-Man. ■Save the PAC-MAN Family! Just as PAC-MAN's birthday party is starting, the evil robot Toc-Man, jealous of our hero, schemes to have the ghosts kidnap the PAC-MAN Family. In order to save them, you must venture to the six strange areas of Ghost Island and face the enemies there. ■Variety-Rich Action PAC-MAN must fly, jump, run, and swim to reach his goal. He can also use items he obtains along the way for attacks like the Pac-Dot Attack and Bomb Attack. The action is even greater than before. ■Even Easier to Play This game is a full remake for the current generation for the PAC-MAN World 20th Anniversary with improved graphics, added action elements, renewed UI, and updated battle systems for boss battles. Failing the same course mulitple times in Quest Mode will unlock Easy Mode to give beginners an easier time.