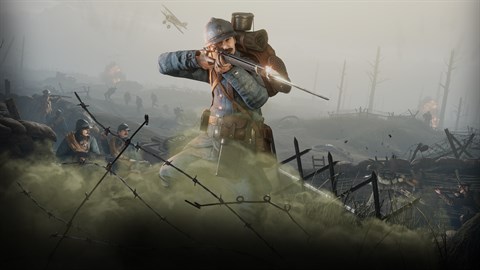 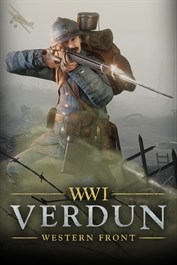 The game takes place on the Western Front between 1914 and 1918, in one of the bloodiest conflicts in world history - inspired by the infamous Battle of Verdun in 1916. Verdun is the first multiplayer FPS set in a realistic World War One setting, the game which started the WW1 Game series. The vicious close quarters nature of trench warfare means that skill with a bayonet can be as vital as good aim with a rifle. The game offers 4 distinct game-modes with many historically accurate features such as realistic WW1 weaponry, authentic uniforms, horrendous gore, and maps based on the real battlefields of France and Belgium. In the dynamic Frontlines game mode teams take turns to go over the top and attempt to capture the opposing trench line. VERDUN KEY FEATURES Experience World War One gameplay: Accurate weaponry with realistic bullet physics, skill based weapon handling, poisonous gas with a claustrophobic gas mask experience, horrendous gore effects, and ferocious artillery barrages Tactical squad-based FPS: 15 distinctive squad types representing soldiers from 5+ countries, each with distinct weapons and equipment True trench warfare: Real-time dynamic frontline with momentum based attack and counter-attack gameplay Authentic World War 1 setting: Typical WW1 music and style, historical battlefields representing the most active parts of the Western Front Challenging game modes: team-based Frontlines, tactical Attrition, skill-based Rifle Deathmatch, and relentless Squad Defense WW1 ON THE WESTERN FRONT The gameplay in this true WW1 battlefield experience is as immersive and gritty as it can get, with features such as optional realistic gore which portrays the true horror of the First World War and authentic weaponry including artillery and gas. Weapons need to be handled with skill - each gun handles differently and there are no floating crosshairs to aid your aim, along with realistic bullet physics to contend with. Battle your way across no man’s land to capture the next enemy trench line, before switching to defense to protect your gains in the Frontlines game mode. Keep your head down or quickly don your mask in the event of artillery strikes or gas attacks. This unforgiving war isn’t for the faint hearted! AUTHENTIC WORLD WAR ONE SETTING The WW1 Game Series currently includes Verdun, Tannenberg (set on the Eastern Front), and the upcoming Isonzo, which is set on the Italian Front. For Verdun, we carried out extensive field research at the battlefield itself and were advised by knowledgeable historians to make sure the individual elements in Verdun are as historically accurate as it can get. Uniforms have been recreated to the tiniest detail, the weapons are modeled to exact references and the maps use realistic props and terrain layouts. Everything in the game has been tailored to recreate the grim atmosphere so typical of WW1, from the immersive interface and war torn maps to realistic sounds and voices that evoke the feeling of actually being there in the mud covered trenches, peering out over no man's land in search of the enemy.