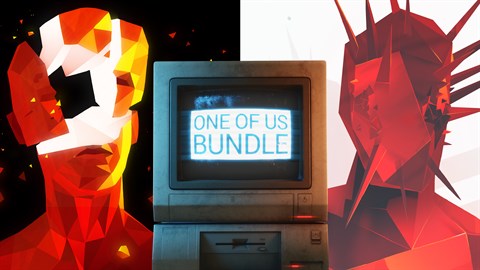 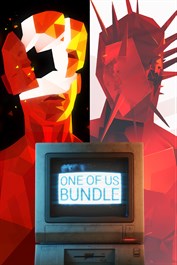 SUPERHOT ONE OF US BUNDLE

This bundle contains SUPERHOT - the award-winning first-person shooter in which time moves only when you move - and SUPERHOT: MIND CONTROL DELETE – the followup title painstakingly created over three years of grueling production to satisfy your intense need for more SUPERHOT. Getting both games in this one neat bundle will let you experience hours upon hours of SUPERHOT’s tight, cinematic ballets of slow-motion mayhem. Bullets wheezing past you from every direction, enemies surrounding you on all sides, shards of brilliant red crystal coating the concrete floor around you - you can easily lose yourself in this world. You can be truly free. SUPERHOT Blurring the lines between cautious strategy and unbridled mayhem, SUPERHOT is the FPS in which time moves only when you move. No regenerating health bars. No conveniently placed ammo drops. It's just you, outnumbered and outgunned, grabbing weapons off fallen enemies to shoot, slice, and maneuver through a hurricane of slow-motion bullets. SUPERHOT’s features: Endless Mode : how long can you last against unyielding waves of enemies? Challenge Mode: take on SUPERHOT with your bare hands, no restarts, timed runs, and more. Replay Editor: edit and upload your best runs for all to see on killterest.com. Extras: delve further into SUPERHOT with mini-games, ASCII art, and [redacted]. Thirty months in the making. Thousands of hours put into development and design. From its humble origins in the 7 Day FPS game jam, through a hugely successful Kickstarter campaign to a plethora of awards and nominations from industry experts, SUPERHOT is a labor of love by its independent, dedicated team and thousands of backers from all around the globe. SUPERHOT: MIND CONTROL DELETE Built on the foundations of SUPERHOT and SUPERHOT VR, MIND CONTROL DELETE continues to bring you more of SUPERHOT’s signature power fantasy. You stand in the center of a firefight. A hail of slow-motion bullets is inching slowly towards your face. You see bright red enemies frozen in place as they run towards you. Weapons in hand, they’re stepping over the shattered remains of the foes you just dispatched. Everything is sharp, silent, and still. Light flickers across the red crystal shards coating the cold concrete floor. A gun slowly spins as it arcs through the air. The weapon dropped by an enemy as their dying body exploded in a shower of brilliant red shrapnel. You take a moment to consider. You’ve been here before. So many times. Maybe this time it will actually mean something. MCD’s features The third game in the SUPERHOT franchise - MIND CONTROL DELETE gives you more insight into the world of SUPERHOT, more story, more signature gameplay. Keep dancing the slow motion ballet of destruction for so much longer than ever before. Much bigger than its predecessors. MCD immerses you in its world for days of increasingly explosive slow motion combat. More mechanics at your disposal than ever before. Experiment with different play styles, different character builds, different ways to outsmart and dominate your enemies. More power to accumulate as you progress through the game. Amass skills, hacks, special techniques to conquer waves of ever more dangerous enemies. More characters for you to control and for your enemies to throw at you. Test your arsenal of tricks and weapons against increasingly deadlier, smarter foes. More polish applied over nearly four years of Early Access development. MCD offers a more refined, sharper, flashier experience than any SUPERHOT so far. More meaning?