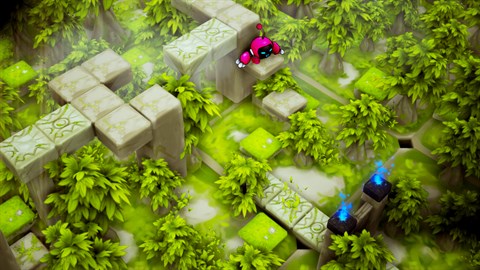 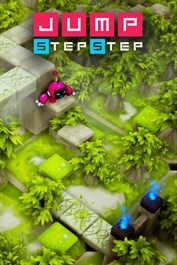 Jump, Step, Step is a relaxing puzzle game where you help Bob (a short-circuited robot) finding his lost limbs, collecting missing parts to repair a broken spaceship and finally discover what really happened to him. However, you don’t control Bob directly, instead, you would setup a sequence of commands like Forward, Wait, Turn Left, Turn Right, Jump etc and then once you are confident that the sequence would guide Bob to the next checkpoint, you press “Play” and Bob will follow them faithfully. If you just like a normal old platforming gameplay, you can control Bob directly later in the game after you completed one run. The game has a relaxing mood mixed with light hearted humour. It starts with Bob just wake up and find out that he lost all his limbs somehow. He is now in a strange place that looks like a garden floating on the sky, he can hear birds singing, waterfall whispering and peaceful music playing in the background. Because Bob’s control unit is damaged, he is a bit mental, together with the fact that the Player is a childlike character, there are many funny moments between them. Sometime the Player will make fun of the fact that Bob breakdowns quite often. Some other time, Bob will get frustrated as he thinks he does all the hard work and the Player just doesn’t help him at all. Despite these, the pair need to help each other escape this planet somehow. Features: • Diverse abilities for Bob including: jumping, picking things up, punching, assessing environment. Etc. • Advance flow commands: Repeats, loops, switch and branches. • Turn the game into a normal platform game once you completed it. • Funny dialogues and interesting story. • Highly polished environment, relaxing mood and music. • Leader-board for best puzzle solutions.