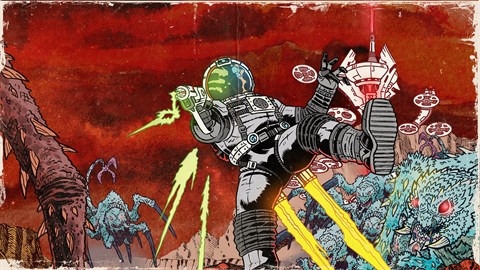 Journey to space in "Lost on Mars", the second DLC pack for Far Cry® 5. Leave Earth behind and go toe-to-claw against Martian arachnids to save the world from an alien invasion. Soar over the dunes and canyons of Mars with a jet pack, blast deadly arachnids with lasers - and save mankind while you’re at it. ALL NEW MARS LOCATION • An uncanny adventure on the fourth planet from the sun. • New Arachnid enemies, an alien threat unlike anything seen in Far Cry before. • Revisit Nick Rye and Hurk from Far Cry 5’s main campaign in a whole new story. ALIEN TECHNOLOGY FOR AN ALIEN THREAT Strange and incredible new weapons and gear, including: • Blaster of Disaster – A single shot space gun made of trusty alien hardware. • Hellfire – Fires 15 bouncing laser balls, inflicting serious damage. • Morphinator – Turn predators into prey … with an explosive twist. • Defy gravity and blast across Mars with your Space Jets Also available in the Far Cry® 5 Gold Edition and Season Pass.