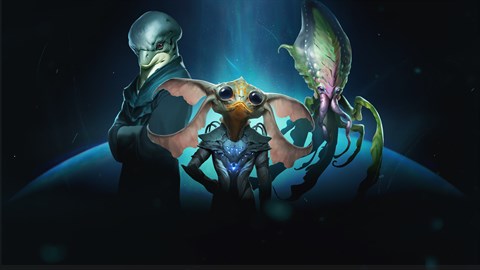 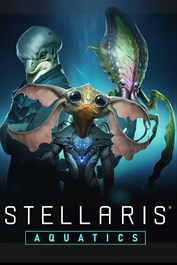 EVERYONE 10+
For ages 10 and up, Fantasy Violence

Embrace the life of a seafaring civilization as you sail the open expanses of the galaxy with Stellaris' most immersive pack yet: the Aquatics Species Pack! Let a wave of new customizable options for your empire crash into Stellaris, with a treasure trove of new species portraits, ship set, origins and more. Strap on your fins and tank, and take a deep dive into the marine world of the Aquatics Species Pack with: ALL NEW ORIGINS: Here be Dragons!: This ancient mythical beast stalks your home world, it’s deep sage blue scales orbiting your humble kingdom. Your relationship with this proud creature will determine the lengths she will be willing to go to either defend or destroy you… you’d be wise to avoid displeasing it. Ocean Paradise: These peaceful civilizations lead a peaceful life in a bountiful environment. With no natural enemies as well as food deposits and bonuses, enjoy unhindered growth and opulence. NEW TRAIT Aquatic: When species evolve to thrive on ocean worlds, they’re also the stereotypical “fish out of water” on others. NEW CIVIC Anglers: The bounties of the sea: fresh seafood and rare pearls are but some of the benefits of a seafarer's life. Visit the agriculture districts to cash in on these valuable consumer goods. NEW ASCENSION PERK Hydrocentric: Ever carry something heavy underwater? It’s easier, right? When you spend most of your time underwater, you figure out cheaper and faster methods of modifying your environment. Terraform planets into oceanic worlds, or make them bigger by harvesting water from other planets. Build the sandcastles of space! COSMETICS New ship set with a sleek look, designed to help you yacht your way through space. New Aquatics Dragon: A new, majestic space dragon will now grace the stars. New Advisor: Sail the stars alongside the Seafarer advisor voice, inspired by high-seas adventure fiction. 15 new aquatics portraits to help you embrace your fishy new existence Some features may require content sold separately