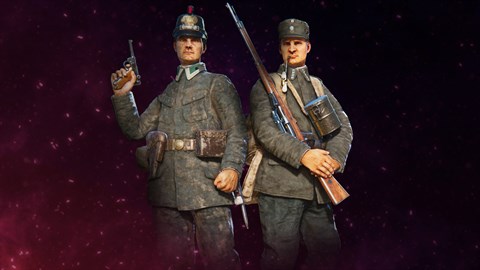 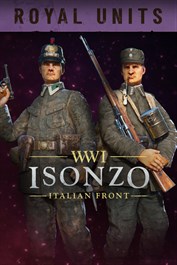 The 'Royal Units' pack expands the German faction by introducing the distinctive uniforms of 2 major states within the "Deutsches Reich": Bavaria and Württemberg. It contains 2 sets of uniforms for all classes, plus a special officer uniform. The ‘Royal Units’ pack contains 40 items: - 13 German Uniforms - 18 German Headgear Items - 5 Facial Items - 5 Mustaches - 3 Faces The first set of 6 is based on the infamous "Royal Württemberg mountain battalion", a veteran formation. They wear the distinct "Litewka" tunic. Additionally they have a wire telephonist engineer and minenwerfer ammunition carrier assault class. They also get access to the iconic "Gebirgsmutze" mountain cap. The Bavarians are also represented with a set of 6 uniforms sporting their unique Bavarian checkered collar tabs for each class. Both Bavarians and Württembergers get access to Feldmutze and Schirmmutze caps with their states' distinct cap cockades (red and black for Wurtemberg, white and blue for Bavaria) and canvas-covered shako's with state-roundels. Especially eye-catching are state-specific bare "Tschako" headgear pieces for the officer, showing the state insignia plate. This pack also comes with 5 pieces of facial hair, including one inspired by Nobel Prize winner and veteran "Eduard Buchner" and Caporetto protagonist "Erwin Rommel". On top of these, there are 5 facial items, including a special German cavalier smoking pipe bearing the image of Kaiser Wilhelm II which will be unique to German forces. Last but not least, the pack contains a special officer set based inspired by the WW1 exploits of Erwin Rommel. A "Kleiner Rock" tunic, a face resembling the historical figure, and matching moustache. NOTE: THIS DLC CONTAINS COSMETIC CONTENT ONLY.