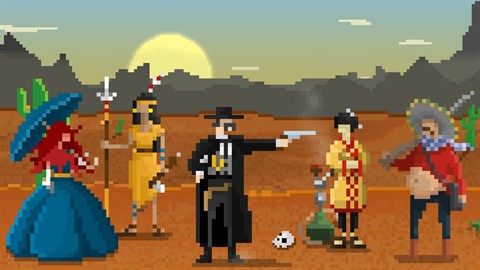 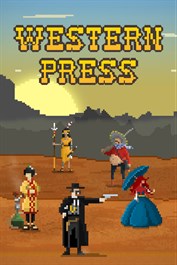 Based on a true story, Western Press is the most historically accurate frontier dueling game available for Xbox One. Probably. Up to 16 players (or bots) compete in a tournament of 1v1 sprints to press a random string of ten buttons the fastest. FEATURES No Time to Explain Learning to play is incredibly simple: Buttons go top to bottom, do them fast. A duel takes seconds, and a 16 player tournament takes minutes. So just how good is your guest list’s controller knowledge, and just how fast are their reactions? Submit your answer in ten buttons or less. (Not less, you'll lose. Do ten.) Online and Local Tournaments for Humans and Machines Alike Hold custom tournaments for from two to 16 competitors with any mix of local players, online players and bots. The tournament system works out all the match-ups for you, so you get to just sit back and relax. Until it’s your turn. Then stop relaxing because it’s time for extreme and relentless stress. A Test of Character Create a profile and play through the Skill Tester to earn your rank, while simultaneously unlocking some of Western Press’ wild bunch. You start with four playable characters, but you’ll have to earn the other 12 by playing the game. Is there anyone fast enough to unlock Wyatt Hurt? Stroll Down Memory Lane Fancy yourself more intellect than athlete? Try Memory Mode, where players must memorise and repeat an ever increasing string of buttons. But make more mistakes than your opponent, and you eat lead.