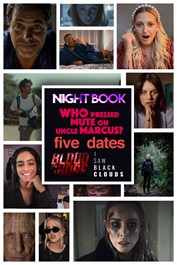 Wales Interactive is proud to offer the ultimate bundle for their very best FMV games! Featuring Night Book, Who Pressed Mute on Uncle Marcus? Bloodshore, Five Dates and I Saw Black Clouds in one bundle! NIGHT BOOK An online interpreter is tricked into reading an ancient book that summons a demon into her home. Night Book is an interactive psychological thriller with supernatural elements and branching storylines. WHO PRESSED MUTE ON UNCLE MARCUS? An eccentric FMV murder mystery with a twist: someone has poisoned Uncle Marcus. Uncover the truth in the yearly family quiz and try to save him before it is too late. BLOODSHORE Bloodshore is an interactive action movie about a televised battle royale between high-profile streamers, entertainers and death row inmates. You control the fate of Nick, a washed-up actor who fights for a life-changing cash prize. FIVE DATES Five Dates is an interactive rom-com about the unpredictable world of digital dating. With five potential female matches, Vinny explores whether compatibility, chemistry and connection is still possible in a world where physical touch is no longer an option. I SAW BLACK CLOUDS After the unexpected death of a close friend, Kristina returns to her hometown looking for answers, only to unearth a string of dark secrets. I Saw Black Clouds is an interactive psychological thriller with supernatural elements and branching storylines. Already have one FMV but not the other? With this bundle, pay nothing on the game you already own but still receive discount on the other!