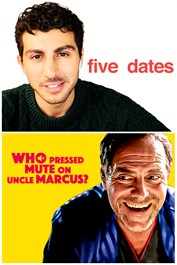 Wales Interactive is proud to offer the FMV Comedy Bundle featuring Who Pressed Mute on Uncle Marcus?, Five Dates in one bundle! WHO PRESSED MUTE ON UNCLE MARCUS? An eccentric FMV murder mystery with a twist: someone has poisoned Uncle Marcus. Uncover the truth in the yearly family quiz and try to save him before it is too late. FIVE DATES Five Dates is an interactive rom-com about the unpredictable world of digital dating. With five potential female matches, Vinny explores whether compatibility, chemistry and connection is still possible in a world where physical touch is no longer an option. Already have one FMV but not the other? With this bundle, pay nothing on the game you already own but still receive discount on the other!